What is cross functional collaboration?

Cross functional collaboration enables team members from different teams to work together on a shared project or a common goal.

Why cross functional collaboration is important for startups

On the other hand, cross functional collaboration helps startups to:

As a startup team member, you frequently engage in cross functional collaboration with multiple teams. If you’re working on building a new feature for your startup’s software, think about the teams that collaborate to make it happen. UX conducts research with customers. Design then takes that research and uses it to create mocks of the feature. Then you need engineering to build it, marketing to promote it, and product to run a retro on the entire process. This type of project requires teams to work together to hit deadlines, run a process correctly, and deliver value to users. And without a PM? All the project management work is handled by the individual teams — on top of the work to actually build and ship the feature. It usually takes a few cycles to get the communication and management right.Engineering collaboration platform CoScreen is a company that has figured out the right blend of communication and management in its cross functional projects. Their weekly UX checkpoint is an example of how its product, design, and engineering teams collaborate on new features and specs in their platform. “The product team presents the latest requirements and features specs on Notion and Clubhouse, and in parallel using CoScreen, the designers show their work to make sure everyone is on the same page,” says CoScreen CEO Till Pieper. “Last but not least, the front-end developer shares the latest prototype and adjusts it on the fly based on the input and tweaks by the cross functional team members.

“What would have taken us hours to sort out asynchronously across three different functions gets done in what’s probably the most productive hour every week just through cross functional collaboration.”

With the recently launched Notion API, developers can connect Notion with the other tools that their teams use. “From the start of the project, launching Notion’s API was an effort in cross functional collaboration,” says Cristina Cordova, Head of Platform & Partnerships. “Obviously, the product team worked together to build the API. But we also had to arm the customer experience team to answer questions about it and the marketing team to communicate its benefits. At the core of the project were the people working together to make it happen.”

When your startup is small, fewer people are working on projects, making it easier to facilitate cross functional collaboration. However, it’s important to build the right systems early on to ensure that these projects stay on track.

When team members know what needs to get done and by when, they’ll be empowered to design a plan of action to get there. “Be clear about results and objectives, and ownership around projects,” says Robin Nichols, Managing Editor at 360Learning. “Don’t leave anyone guessing as to who is accountable for what, or who might be a bottleneck for a project to move forward.”Notion’s Timeline view enables you to visually map each phase of your project so that each team has a clear sense of the work required of them and the time they have to get it done.

Startup employees wear multiple hats and are often dragged in different directions depending on the need of the hour. Setting clear roles and responsibilities early on prevents any one team member from taking on too much and keeps everyone accountable from the get-go.One framework you can use to assign roles and responsibilities is the RACI (Responsible, Accountable, Consulted, Informed) framework. It gives transparency to cross functional projects when they begin so that everyone has a clear understanding of who’s working on what every step of the way. Here's an article that has a step-by-step process to build your own RACI matrix in Notion.

Strong relationships are the foundation of strong collaboration, and they help team members to understand what their colleagues need to do their jobs efficiently. Tina Chen, Product Design Manager at Slack, has a list of questions she asks engineers she’s working with on a project to establish a strong cross functional relationship early on:

By asking these workflow and process questions, Tina can optimize how she works on a cross functional project to accommodate engineering requirements. The questions are designed to bring everyone’s needs to the forefront and establish transparency in the team that’ll tackle these projects. When everything’s on the table, teams work better together.When you’re in the thick of project planning, scheduling meetings, and prioritizing your other work to make space for your cross functional projects, it’s easy to forget to spend time asking meta-questions about workflow and focus only on the work at hand. One way you can avoid making this mistake is by creating a reusable project kickoff meeting template that covers the essential tasks you need to kick off a project successfully.

Record notes and updates to keep everyone on the same page

With multiple teams sharing updates on their progress in cross functional project meetings, robust meeting notes are essential to ensure that nothing falls through the cracks and the project is completed on time. This is especially important in situations when teams are distributed. Notes can bring team members up to speed asynchronously, saving time for everyone in remote and in-person work settings. One way to never miss anything across all the projects you’re working on is to connect a homepage for your project with all the meeting notes about that project. This brings clarity in discussions, decisions, and everything else that happens in a meeting, which might impact a project.In Notion, you can do this by connecting your roadmap with your meeting notes using relations. You can add a Relation property to your meeting notes document, connect it to your projects database, and link the relevant project. This way, every time you open your project pages, all your relevant meeting notes are instantly available to you. Here’s a short five-minute video that shows how you can do that: 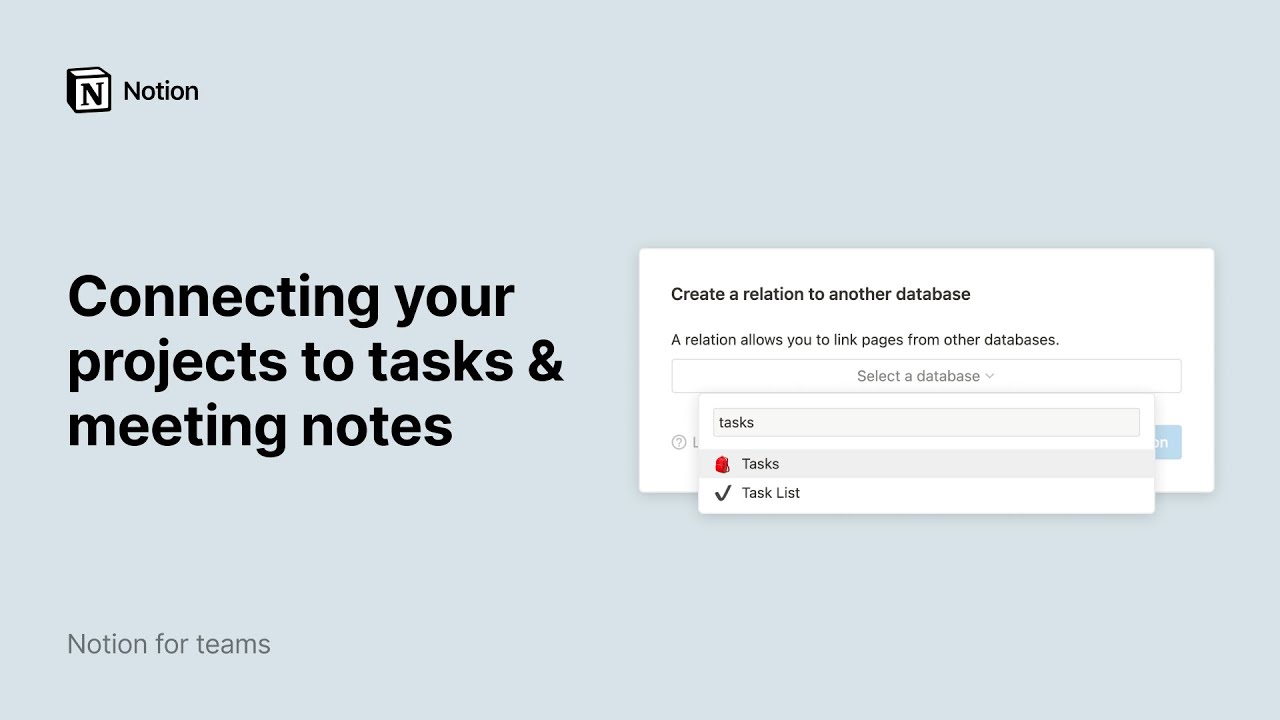 When you build the right systems for your cross functional projects, they can scale with you as you grow in size.

Get executive buy-in to emphasize the project's importance

Executive buy-in at the start of a cross functional project can help team members see its importance early on. Past research shows that cross functional projects with a single high-level executive champion had a 76% success rate. Projects with only moderate governance support had a 19% success rate.Some ways that organizations can signal executive buy-in are:

A project leader, sometimes referred to as the Directly Responsible Individual (DRI), manages the project, makes adjustments to the project plan based on inputs from each team, and ensures that team members are on track to complete their respective tasks. Without a DRI, it’s hard for multiple teams to stay organized and in sync with the project’s needs.If you’re using Notion to run projects, you can tag the DRI in the project page. That way, there’s clarity for the DRI and the rest of the team — they know who to ask questions. You can also use the @ symbol to tag them for more specific feedback, like messaging for a product announcement.

When you link incentives — like compensation and performance reviews for team members working on cross functional projects — to the success of the project, you increase the likelihood that the project will get completed on time. With everything going on at a startup, teams are often juggling many projects at once, so incentives help align and prioritize what’s important to do now — and why.There are two paths you can take when you design incentives for cross functional teams:

Every cross functional project is different — different requirements, goals, teammates, execution strategies, workflows, and more. So no matter your company’s size (even if you’ve done many cross functional projects in the past!), it can be hard to nail down the best process for the project at hand.Strategy experts Paul Leinwand, Cesare Mainardi, and Art Kleiner advocate for companies to set up permanent cross functional teams to increase their chances of success. While that approach might not make sense for everyone, systems that facilitate continuous cross functional collaboration provide a more approachable path that’s easier for startups to implement.Codecademy does exactly that. It uses Notion to embed system-based cross functional collaboration across its organization. One example of this is its Metrics Dictionary wiki page, where team members from every department define their KPIs and metrics so that their co-workers in different departments can understand them. Kip Price, Codecademy’s Director of Engineering, says, “We use Notion as a way to rally around what we want to get out of a particular project and to drive teamwork.”Looking to build cross functional collaboration systems in your startup? Get started with our roadmap template right here.

Get going on web or desktop

We also have Mac & Windows apps to match.

We also have iOS & Android apps to match.

Here’s why your startup needs a single source of truth

A single source of truth gives startups a single place to plan project and organize all their most vital information.

How to build a knowledge management system

Knowledge management systems unite all your company knowledge in one place. Here’s how to build one that’s easy to navigate for your team.